About four miles out on the Tuam road on the right-hand side is the entrance to Castle Ellen House, the residence of the Lambert family since the beginning of the 1800s.
Skip to content

About four miles out on the Tuam road on the right-hand side is the entrance to Castle Ellen House, the residence of the Lambert family since the beginning of the 1800s.  Castle Ellen’s historical lineage centres principally on its occupants (rather than its architecture) the most infamous of course being Sir Edward Carson whose mother, Elizabeth, was born and lived at Castle Ellen. 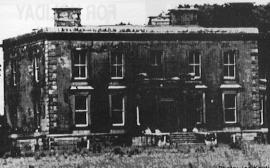 The history surrounding the people who lived and visited the ‘big house’ has been well documented by such local historians as the late Aggie Qualter and more recently a fine historical account written by Ann Healy in the Tuam Herald some years back.  But what about the Castle Ellen of today?  The owner of Castle Ellen house prior to the present owner was a Mrs MacNally who sold the house and surrounding property to the Land Commission in 1969.  During the 1960s and into the 1970s much of the house and outhouses have been stripped of any valuable items such as fireplaces and furniture.  The lead was taken from the roof causing untold damage in the process.  Cut stone and timber was taken away for the construction of various schools and churches.  In less than ten years, during this period, Castle Ellen was almost unrecognisable and destined for an end similar to that of Belleville, Moyode and Dunsandle.  Luckily though fortune changed just in the nick of time and Castle Ellen was saved from certain destruction.  The person responsible for this change is the present owner – Michael Keaney.

Castle Ellen was bought by Michael in the early 1970s for £4,500, a considerable sum at that time considering you could buy a car for £700- £800.  This included a house, a fine yard and about 13 acres of land, most of which is covered by forest.  Michael immediately set about restoring the big house and the extensive number of outhouses attached to it. The house was built about 1810. Perhaps lean times prevailed then as the house does not contain a lot of cut stone – a feature of houses built during this time. Instead undressed limestone with a rubble filling forms the main material in the construction of the house.  The outhouses which form the yard were built much later than the house – around the 1870s.  They are impressively built of the finest cut stone and as such have survived, miraculously, intact – apart from some quoin stones taken from the entrance arch to the yard.  It appears that during the construction of the yard the fine entrance porch – of cut limestone – was added to the main house giving it added status and bringing it in line with other stately houses. In fact the contrast between this decorative ionic porch and the simple plainness of the house gives it a uniqueness all of its own.

The first item on Michael’s work list was the roof of the house, badly damaged over time by vandalism, weather and neglect by indifferent owners.  Expense required that this job was tackled over time and an indication of its cost can be got from the fact that he has only just completed this work.  The huge interior of the house is being restored on a room by room basis and it is here that much work remains to be done.  Luckily enough Michael, a civil engineer with Galway Corporation, can call on his own expertise in this regard.  Castle Ellen is a haven for all sorts of artists – be it poets, sculptors, playwrights or painters.  Many come out from Galway simply to take time out and reflect on their careers in beautiful idyllic surroundings. Many more come directly to Castle Ellen to get their ‘start’ in the artistic world and indeed Michael informs me that a number of artists have got the start they needed at Castle Ellen.  They have a very enthusiastic host in Michael and rent is simply a matter of ones means to pay.  Alternatively rent may be supplemented by odd ‘jobs around the yard and house particularly if one is handy at carving or stonework etc.  Castle Ellen is opened to the public by Michael, so it is in effect a public amenity and a very important one close to home.  I myself will admit that I was not aware of this until quite recently.  I found it strange when I had to drive to Coole Park to enjoy similar walks and quietness to that obtained at Castle Ellen.  Indeed Castle Ellen is even more special than many contemporary estates of its period.  Firstly, it is open to the public and secondly its reason for being – the house – is still standing as spectacular as ever today.

Michael is well aware of the historical value attached to Castle Ellen and this explains largely why he is so keen in maintaining and restoring many of its features.  Recently he renovated one of the outhouses and uses it as a small museum, but much work remains to be done here.  A particular item which Michael has in his possession deserves special mention here. Sometime ago Michael wrote to the Northern Secretary – Sir Paddy Mayhew inviting him down to Castle Ellen. Michael stressed to Paddy the links of Castle Ellen with northern unionism and in particular that of Sir Edward Carson.  He outlined the role Castle Ellen could play in the important peace process taking place at present.  Michael expected nothing more to come from this until about a week later a letter arrived from Hillsborough, Co. Down.  The Northern Secretary’s reply was swift and he outlined in it his reasons why he could not come although he acknowledged that the importance of the place was quite significant regarding the present impasse in the peace process, Nothing greatly unusual in this you might say except it was a reply from the Northern Secretary but the reply was written not in the Queen’s own language but ‘as gaeilge’.

Michael informs me that visitors are welcome to Castle Ellen to walk around, relax and browse about.  The best visiting times are Monday to Friday between 11 am and 4 pm.  Unfortunately, or fortunately as the case may be, Michael himself works Monday to Friday and so the weekend is devoted to essential maintenance and on going construction work, work which he is unable to carry out during the week.  So he would appreciate if people would hold out on week-ends for the present.  A guide is available Monday to Friday for the above hours.  There is no charge as such but a voluntary donation would be very much appreciated.  A box for this purpose is located just inside the main door of the house.  Michael receives a tiny, insignificant tax relief on raw materials used for the house, for opening his house to the public.  All restoration work is funded entirely out of Michael’s own pocket and he has to pay a guide and provide accommodation for budding artists.  Finally, while in the house, have a look at the fine mirrors and particularly the beautiful double stairway leading down to the main hall.  A puzzling feature within is the number of small school desks neatly packed in rows along the hallway.  This may stem from its use as a temporary school while Carnaun was being repaired.  Perhaps some of the readers of this article have pleasant memories of childhood days at Castle Ellen.

This article was originally published in the Athenry Journal and appears here with the kind permission of the editor Mr. Finbarr O’Regan.

Book a Room on Airbnb